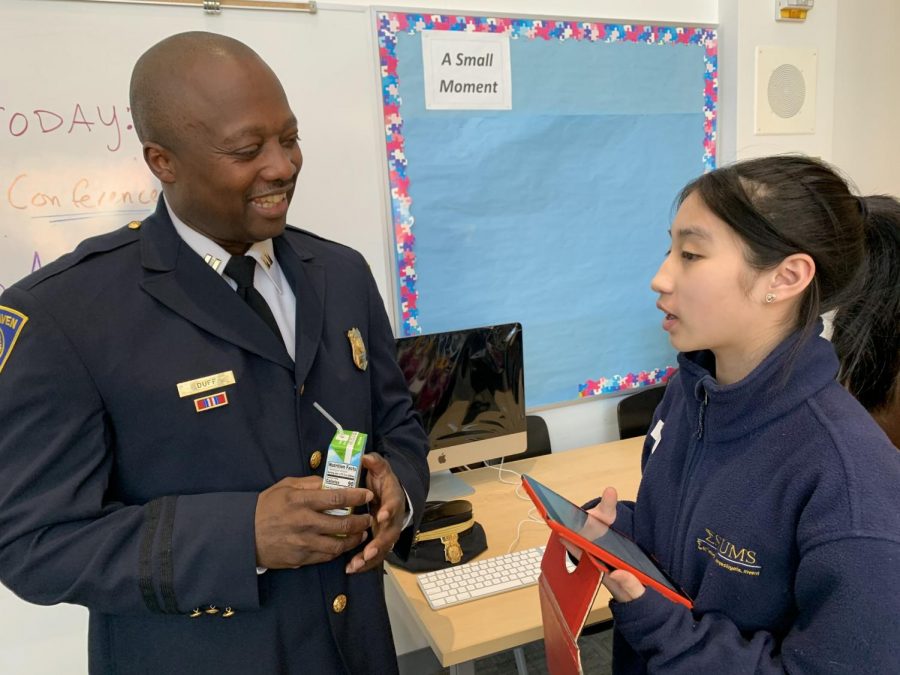 One day, a young man from a small town in Arkansas saw something that caught his attention: A notice said that The New Haven Police Department was looking for officers.

“I thought I would try it,” Anthony Duff told reporters at the East Rock Record. He had graduated from Yale, was working in retail and always thought he would be a lawyer. But this changed his mind. Now, 24 years later he is a New Haven Police Department Captain.

Captain Duff, who is the spokesperson for the department, talks with media almost every day. We interviewed him several weeks ago. Captain Duff said he has “worked all over the police department,” including the patrol division, the detention facility, internal affairs, the missing persons unit, special victims unit, the forensic unit, and many more areas.
“I made the decision to intervene in an attempt to save someone’s life.”
Early in his career, Captain Duff worked in the juvenile division. He said that working with young people helped prepare him for other tasks in the future as a sergeant, lieutenant, as well as his current position, Captain.

Many people will remember that last August, Captain Duff became a witness to gun violence. He was off-duty at the time when he was on Dixwell Avenue.

“I was stopped at a red light and I witnessed a crime,” he said. “I had to make a decision. Will I sit there and be a witness? I made the decision to intervene in an attempt to save someone’s life.” While he tried to do that, he said, “at some point I was shot multiple times.”

He unfortunately got shot in various parts of his body. He was brought to the hospital quickly and was able to survive.
“There is nothing I would have done differently.”
In answer to questions from East Rock Record reporters, he said being shot “catches you off guard. With me, I didn’t even feel the pain of being shot. It was like my body just stopped.” He said that “time really slowed down” and it “seemed like everything took forever and a day.”

Despite serious injury, Captain Duff said that, “There is nothing I would have done differently.” 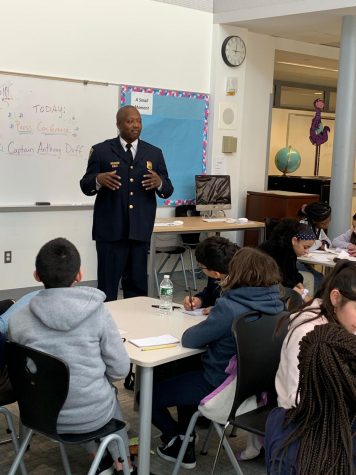 When he was a kid, Captain Duff was always reading books to make sure that he was prepared for the future. Even if he thought he was preparing for law school instead of being a police officer. He also played football. Because he grew up in a farm community, he said kids were allowed to get a learner’s permit at age 14 to drive farm equipment. So many students would drive in vehicles their parents had registered. “Some parents would register their pick-up trucks as farm equipment,” he said. Some people even drove without licenses.

Many people like to ask kids, “What do you want to be when you grow up?”

Captain Duff’s experience shows us that even if we think we know exactly what job we are going to have in the future, that we can change our minds and still succeed.

“Reach for the moon and land on the stars,” he said is what his mother believed.

We can have high goals for ourselves and we should. But it is also okay if we don’t exactly reach them or we change them. What is important is that we try and that we are happy with what we are able to do.
“Reach for the moon and land on the stars.”
So what if you want to be a police officer?

“The first thing is to maintain an excellent academic record, be well rounded and develop good communication skills and writing skills,” he said. “You need a good personal record” and “little to no criminal behavior.”  If you want to enforce the law, you should follow it as well, he said.

He also told East Rock Record reporters that even though police officers have an outer “gruffness,” don’t think that you shouldn’t bother the police. “It is our job to keep you safe.”