The bathrooms at East Rock Community & Cultural Magnet School used to be places to go when you had to go, and also for some peace and quiet.

But now they are often messy — and sometimes even dangerous!

“We’ve had to deal with a lot of fights this year,” said Sabrina Breland, principal of East Rock School. “Lately, I’m kind of embarrassed to admit, but we have had a lot of students getting their hands on each other in the bathrooms.”
According to The East Rock Record Fall 2021 Survey, 30 percent of students said they have seen a fight in the bathroom. One of our team reporters, Alanis Montoya, third grade, saw students putting hands on each other, and also saw students crying. One student even hit her by accident. That made her feel very scared.
This is not just a problem at East Rock School. Across the country and around the New Haven Public School district, there are many reports of students acting out, often in the bathrooms.

During an interview with East Rock Record reporters in November, Justin Harmon, spokesperson for the New Haven Public Schools, said that “there was a fire in the boy’s bathroom” at one of the New Haven Schools. “I think bathrooms are, unfortunately… a place where [students] can be temporarily out of sight.”
In February, Mr. Harmon shared  that fighting in school bathrooms “remains a problem.”
Ms. Breland said that while school leaders have dealt with a lot of fighting, often in the bathrooms, they have tried not to send students to out-of-school suspension. Part of the problem is that the pandemic has been very hard emotionally on students. Some students said it has been hard because many friends are out sick, which can make people feel sad and lonely.

When bathrooms become places for fights, it is harder for students to use them when they need to, and also when they just want a break from class. Having a space of peace and quiet can give students a way to reset during the school day.

According to the East Rock Record survey, 45 percent of students said they leave class for the bathroom even if they do not have to go.

Mr. Harmon understands that. “I was a student myself once and I remember times when I needed to duck out and get some quiet time,” he said.

Ms. Breland said the bathroom break can be helpful for students. “If you need to step out of the classroom, let the teacher know instead of just leaving the classroom. But, yes, that is a nice strategy.”

Students also go to the bathroom to use their phones, which they are not allowed to use in class. A student said they even saw another student using a computer in the bathroom.

Ms. Montoya has also noticed that “some people go to the bathroom to play around with other people.” She doesn’t not like it and said they often make a mess. “They are just making the janitor clean again and again,” she said.

Ms. Montoya is also troubled by behavior that includes students standing on the toilet seats, which they are supposed to do during lockdown drills. “Even if there isn’t a lockdown, they go on the toilets for no reason,” she said. When she sees a fight in the bathroom, Ms. Montoya tells a teacher so they can tell Ms. Breland.

It would be best if students would use the bathroom and then come right out. 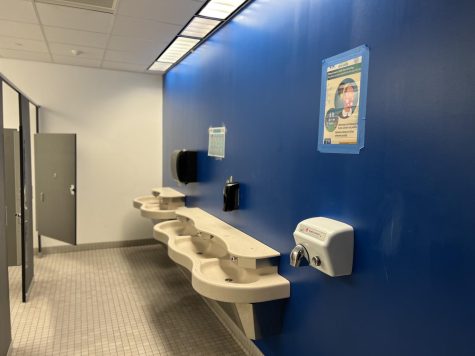 One other big problem with the bathrooms is that students make big messes and use too much water and paper. This is bad for our climate and our planet. The East Rock Record survey also found that 54 percent of students said they tried to use less water and toilet paper in the bathroom, a percentage that seems lower than it should be.

Kristen Hebert, who teaches third grade at East Rock School, suggested reminding students about water and paper use. “I think having signs in the bathroom would be helpful. I think if kids knew what to do, they would probably do it,” she said.

We asked two students if they have tried using less paper towels after washing their hands. One said “no,” and another said, they use “a lot” of paper. “It doesn’t really come to mind. I don’t really think of using more or less paper towels,” the student said.

Only students can help keep the bathrooms at East Rock School cleaner — and make them places, not for fighting, but for a quiet break during the school day. Kids should stop playing in the bathroom and fighting because it can hurt people and hurt feelings.

There have been some changes. Four people used to be allowed in the bathroom. Now, only two can go at once. Some students don’t use the passes — and some students are avoiding the bathrooms because they are scared to go, worry they could get stuck there for a lockdown drill or, as one student said, “there could be a fight going on.”